Its flexible clusters, its spherical grape, golden and sun-drenched, its delicate skin, its honeyed juice which explodes in the mouth do all the delicacy of this fruit. 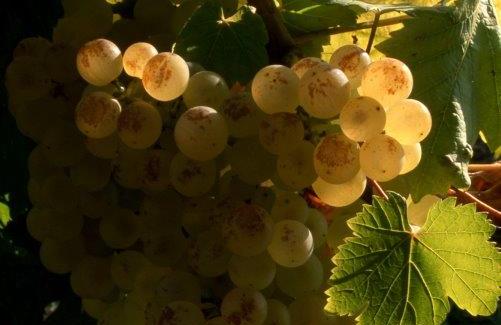 A new medal for our  Chasselas, it is henceforth registered in the "National Inventory of Intangible Cultural Heritage".

Chasselas, AOC (Appellation d'Origine Controlée) since 1971, was the first fresh fruit to benefit from this recognition. Since 1996 denominated AOP (Appellation d'Origine Protégée) thanks to which Moissac has been labelled “Site Remarquable du Goût” in 2003. From now on it appears in this prestigious inventory under the official denomination “the culture of the Chasselas grape of Moissac AOP”.

The city has obtained with the Chasselas Union the label «Site Remarquable du Goût».

Moissac Chasselas is recognised by it translucide grapes whose fine golden skin holds a sweet and delicate juice.

Moissac is the no.2 producer of table grapes in France after the Vaucluse which produces a vastly superior quantity of Muscat grapes.

In our territory, Terres des Confluences, it is grown in several communes where the geographical layout and soil are propitious : Moissac, Durfort-Lacapelette, Lizac & Boudou.

Lower Quercy in which the appellation is recognised is distinguished geographically by its own geological, agronomical and climactic characteristics. Lower Quercy is spread over outcrops of molasses and tertiary limestone.

Only certain types of soil are favourable for growing Moissac Chasselas AOP.

As for the climate, the region has an average temperature of  10 degrees with a small variation of temperatures, a relatively low level of rainfall and a long period of fine weather in the autumn.

This table grape has been a local speciality since the 18th century. Its cultivation requires a distinctive know how passed down through generations of ‘chasselatiers’. Inseparable from the history of the town, Chasselas cultivation constitutes a unique intangible heritage.

The history of Chasselas is also written in the streets of Moissac. On the esplanade on the banks of the Tarn the kiosk “Uvarium” reminds us that Moissac was consecrated “premiere grape resort of France” in the 1930s.

More than 300 chasselatiers produce between 3,000 and 3,900 tons of grapes AOP. Each planted hectare requires about 1,200 hours manual labour throughout the year to produce an average of 13 tons of fruit. From the cut to the table, the bunch of chisels grapes demands a thousand attentions. Picked, then relieved of damaged grapes by hand. The bloom, the golden and dark adornment is a sign of quality and care. The Chasselas grape is an exceptional product; grown biodynamically, respecting the soil and the natural environment.

Moissac, a Label quality as a "site remarquable du goût".

Four Ministries (Culture, Tourisme, Environment and Agriculture) were responsible for the concept of “Site Remarquable du Goût”. They created a list of 100 ‘Sites’ distinguishing:

Moissac has been a member since 2003, and today the network comprises 54 members.